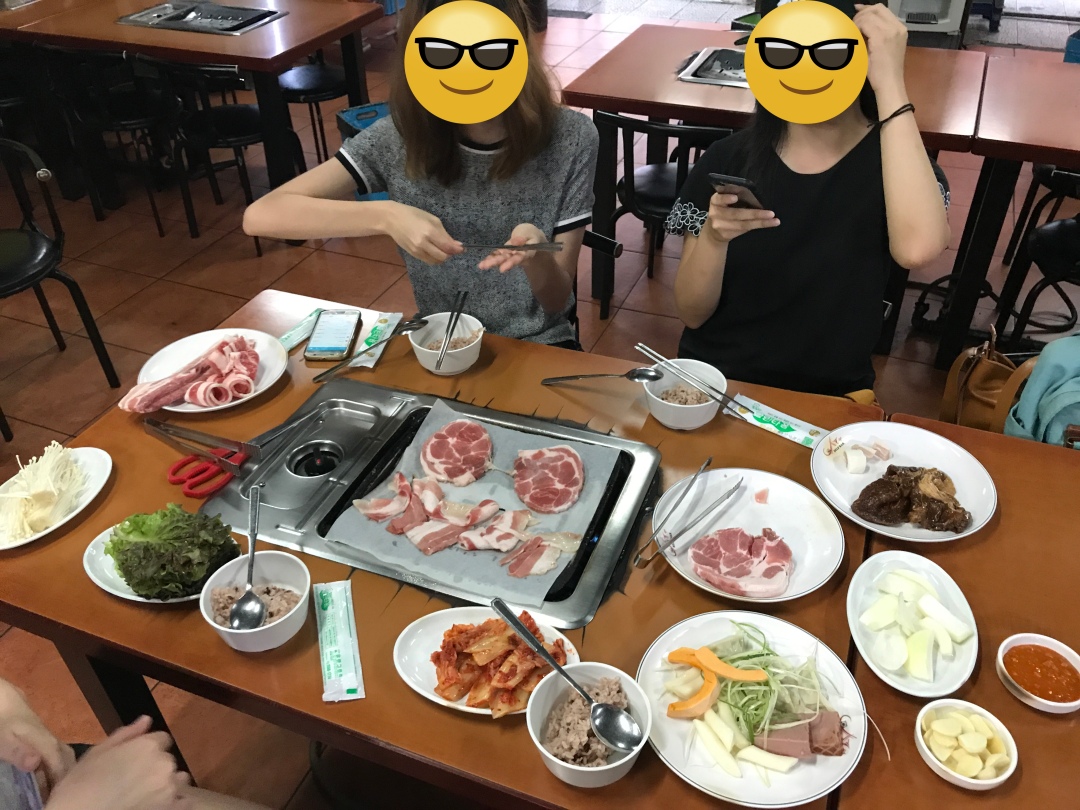 UPDATE: During my recent trip in November 2018, I was unable to find this restaurant at its original location, and most locals we asked didn’t know about it either, so it’s most likely that it’s been closed 😦

So the name of the place isn’t exactly ‘Sinchon Cheapest BBQ Buffet’, but it’s exactly what it means – the cheapest BBQ buffet you can find in Sinchon, and I daresay probably in the whole of Seoul. 9000 won equates to about SGD 10.90 – you have to pay double the price to eat a decent K-BBQ in Singapore, just imagine!

We first read about this place from this kind blogger who shared directions on how to get to this 9000-won BBQ buffet when we were searching for good BBQ places, and the next thing we knew, we headed there on our weekend in Sinchon/Hongdae After a long day climbing up hills and walking endlessly through the Yonsei University area, we decided to head for our main (yes, main) activity for the day – tracking down this 9000-won BBQ.

Just to be sure of where we were headed to, we asked one of the staff in those tourist help kiosks, but apparently even the tourism staff didn’t know that this BBQ existed. That’s exactly how elusive this place is.

We had no choice but to trust directions given in the blog. To be fair, the directions on the blog looked simple enough:

Reality was that things were simply, well, not that simple. Steps 1 and 2 were simple enough, but steps 3 and 4 are where things get a little complicated. In Step 3, you have to look out for a store that really sells a lot of toys – if your eyesight isn’t too great, I suggest you try and spot gigantic stuffed toys. At Step 3 we were already doubting if the directions were up to date, that maybe the toy game store had already closed down because we simply couldn’t find it. It was still there when we went in July 2017, but I’m not entirely sure about the longevity of stores in Korea. If all else fails, look out for the ‘noraebang’ sign on the left!

After walking round and round and round (because we are so bad at finding our way), we finally spotted the sign for the 9000-won buffet. We reached the BBQ place at around 5+ PM, so we weren’t too shocked about the place not being crowded. In fact, the BBQ place was waaaay too empty for one that offered a 9000-won buffet! There was only one other table with two locals, and throughout our 3 hours there (yes, more on that later), there were still hardly any diners. To be honest, we quite liked the quiet atmosphere because it was quite a change from the usual boisterous K-BBQ places in Singapore.

Moving on to the food!

They have a pretty decent selection of food, ranging from well-marinated meats and vegetables to good banchan, soups, etc. For 9000-won, this is really impressive. I don’t know how the owner manages to make any money out of this, because I’m sure there are many people (like us) who eat all the meat to their heart’s content. The meat is actually pretty fresh, and none of us had stomachaches afterwards, so you can rest assured that the food here is clean and of good quality even if it is cheap.

You can even eat healthier grains (which, to my knowledge, is more expensive than white rice) while indulging in sinful barbecued meat – how thoughtful! 😂

We had such a good time eating here that we spent a total of 3 HOURS here. Just imagine how fantastic it feels to keep eating and eating without having anyone telling you that you’re eating too much (oops) or staying on for too long. My photos show just round 1 of our buffet adventures – I eventually lost count of how many rounds of meat we went for. The service here is really good as well. The ahjumma would occasionally help us to grill our meat at times when she was free, and never once looked at us disapprovingly for staying on to eat so much meat.

I strongly, highly, wholeheartedly recommend coming here if you are in Seoul and ready to eat a year’s worth of meat here FOR JUST 9000 WON. Even if you don’t stay anywhere near Sinchon, the trip there is still worth every cent deducted from your T-money card. Hardly anyone believed us when we told them that we had a BBQ in Seoul for less than SGD 11, but my friends, this place is undoubtedly real. I’m not sure whether it has gained more popularity since it’s been a year since we last went to eat, but I’m really hoping it’s still that same welcoming place it was in one of my fondest memories of Korea’s food.

Head to this blog to see photographs of how each landmark looks like!

This site uses Akismet to reduce spam. Learn how your comment data is processed.